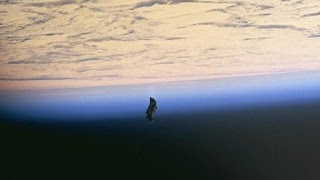 The bottom line here is that this object photographed from the STS-88 mission (December 3 to 15, 1998) is a spacecraft insulation blanket accidentally dropped by astronaut Jerry L. Ross during an extra-vehicular activity. This piece, one of six installed on the first segment of the future International Space Station, burned up in a few days (it was replaced on the next mission.) Below, ex-astronaut Ross (on the left) meets Oberg. 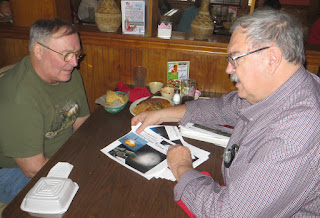 (1) Doing research for my bibliography paper on UFO waves I came across some additional material on some forms of remarkable social behavior of which UFO students should be aware. One particular reference worth reading is the book Outbreak! The Encyclopedia of Extraordinary Social Behavior, a joint work by noted British ufologist Hilary Evans and by American sociologist Dr. Robert E. Bartholomew, an authority in the study of collective delusions: http://tinyurl.com/nevlez8
(2) A visual gallery extraordinaire of phenomena, effects, objects and even animals that produce images usually taken as UFOs, can be seen in the website created by S. S. Shpakovsky here (eight pages): https://www.flickr.com/photos/notufos/
(Thanks to Igor Kalityuk)
(3)  The latest about Adamski, the infamous contactee, is a very well documented book authored by Marc Hallet (Belgium) with Richard W. Heiden (USA). It is entitled A Critical Appraisal of George Adamski. The Man Who Spoke to the Space Brothers. You can download it free:
https://archive.org/details/ACriticalAppraisalOfGeorgeAdamskiTheManWhoSpokeToTheSpaceBrothers
(4) Argentina and the 1965 UFO wave. The journalist Guillermo dos Santos Coelho has penned an interesting article for the digital edition of the newspaper Clarín, with the following abstract: “It has all the ingredients. An exotic scenery, brave men and the climate of an epoch that excited the imagination, shortly before the first landing on the Moon. Because of that, the UFO that prowled around the skies of Antarctica 50 years ago become a milestone that featured on the front covers of all Argentine newspapers and magazines. And it sparked a collective psychosis that lasted all the winter and more.” Read this note (in Spanish language) here:
http://www.clarin.com/especiales/paseo-Antartida-disparo-psicosis-argentina_0_1386461474.html
I was pleased to read this article from an Argentine reporter, because it confirms one of the theses emanating from our own investigation. In the book Avistamientos OVNI en la Antártida en 1965 (UFO sightings in Antarctica in 1965), we held that the extensive media coverage of these misunderstood events in the South Pole stimulated in the continental homeland a wave of UFOs as unreal as they were numerous:
http://www.upiar.com/index.cfm?artID=182
(5) The veteran Argentine investigator and amateur astronomer Carlos Demaría, recalls in his blog the thirtieth anniversary of a renowned UFO sighting over Buenos Aires on September 17, 1985. Then, multitudes saw and photographed an unidentified flying object. Demaría quickly realized it was a sort of balloon, but at the time, he was far from knowing the real nature of the balloon. Soon thereafter, they reported that it was a sophisticated balloon of the MIR series (Montgolfier Infra Rouge) conducting experiments on behalf of the national center of space studies (CNES) of France.  This is the pertinent blog’s entry (in Spanish):
https://cataovni.wordpress.com/2015/09/17/globo-sonda-mir-infrarrojo-frances-30-anos-despues/
For his part, another Argentine citizen, the admired journalist and writer Alejandro Agostinelli has published his own narration of the events in a neat and excellent account on his Hispanic blog: http://factorelblog.com/2015/09/28/mir/
(6) “UFO phenomenon and psychopathology: A case study”, a new paper by Jean-Michel Abbrasart, Ph.D. candidate in Psychology at the Catholic University of Louvain, that can be found here:
https://www.academia.edu/16448052/UFO_phenomenon_and_psychopathology_A_case_study
LITERATURE
How UFOs Conquered the World
This is the ultimate (2015) contribution to ufology by university professor, prolific author and blogger Dr. David Clarke, “one of the Britain’s leading writers on folklore and the supernatural,” as the book’s back cover describes him in full authenticity. Humbly, Clarke declares the book “is not intended to be a definitive explanation of the UFO mystery.” Because the subtitle reads The History of a Modern Myth, he continues to say that his use of the word “myth” does not imply that any or all UFO phenomena are true or false. Well, it is obvious that Clarke is well aware that no nuts-and-bolts hypotheses work well after seven decades of modern UFO history and less if we expand our field of view to at least 1896, but he is not willing to be too astringent or audacious, not in the bare beginning. Because, at the very end, in the concluding chapter (the eye of the beholder) Clarke quite unambiguously emphasizes the findings of a personal and professional interest spanning almost 30 years:
(1) there is no such thing as ‘the UFO phenomenon’, but lots of phenomena that cause UFOs, (2) there is no such thing as a ‘true UFO’, (3) extraordinary claims require extraordinary evidence, (4) accounts of UFO experiences form the core of the syndrome, but stories do not constitute ‘evidence’  but folklore, (5) Culture –not experience‒ creates the UFO interpretation but some experiences are independent of culture, (6) the UFO syndrome fulfils the role of the supernatural ‘other’, (7) the extraterrestrial hypothesis and other exotic theories cannot explain UFOs, (8) the idea of a super-conspiracy to hide the truth about UFOs is unfalsifiable, (9) the common denominator in UFO stories is the human beings who see and believe in them, and (10) people want to believe in UFOs.
Here is when someone murmurs Amen or just stands up and claps his hands.
Don´t wait and go for it: www.aurumpress.co.uk 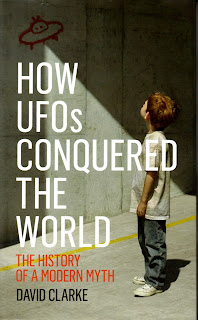 Edited by Dr. Artem S. Bilyk and released August 2015 by the Kiev Polytechnic Institute, National Technical University of Ukraine. This is a 126-page, A-4 sized volume devoted to reviewing four aspects of the UFO problem: (1) Information and technical aspects of anomalous phenomena research, (2) system-analytical studies of anomalous phenomena, (3) experiments and   engineering  in anomalous phenomena research and (4) physics and modelling of anomalous phenomena. Dr. Bilyk is the Chairman of “SRCAA Zond”, a research center dedicated to anomalous phenomena from the Department of Aircraft and Space Systems of the Kiev Polytechnic Institute, http://zond.kiev.ua/
The book contains a preface plus 17 papers, by 14 main authors, 8 from Ukraine, 2 from Russia, 3 from Europe (Spain, Austria and Netherlands) and 1 from the USA. The text is in English (seven papers) and Ukrainian (ten papers) with abstracts in both languages. [It includes my article “The Future of Ufology”].
The book includes some interesting contributions on UAP detection with the aid of civil aviation radar systems, measurement of information quality of UAP reports, review of experimental and instrumented strategies, statistics extracted from a database of 1,250 UFO reports, a UAP detection system proposal, etc. However, UFO research in Russia (or Ukraine for that matter) has always been peculiar. On two grounds. Firstly, something to envy, the high share of scientists and PhD experts busy in this field, compared to Western ufology. Secondly, something to deplore, regarding the subjects investigated. This monograph is not an exception, as we can find papers on the accidental death of former cosmonaut Yuri Gagarin, gravity measurements and the solar cycle or during eclipses, the use of “dowsing” to detect non-trivial field sources, prehistoric anomalies in cartography, or crop formations. These peculiarities aside, this work has a terrific merit, considering the hard economic conditions of the country. I would recommend the new publication, one that you can purchase from srcaa@zond.kiev.ua (25 US dollars or 23 Euros, postpaid.) 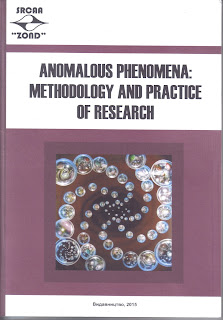 UFO waves are a very distinctive property of UFO phenomena. One of the most famous such waves was the extended “triangle” wave in Belgium from 1989 to 1992. The above volume is an in-depth study of the antecedents, unrolling and finale of a UFO flap that may reveal if the reports’ surge is concomitant to unusual activity or media-activated causes. This new book, OVNI en Belgique: Contributions Sceptiques (Lulu, June 2015), faces the non-fantastic side of this celebrated wave, presenting the work of a group of French and Belgian skeptical researchers formed by Jean-Michel Abrassart, Nicolas Gauvrit, Marc Hallet, Renaud Leclet, Roger Paquay and Raoul Robe. It is recommended reading to grasp what critics have to say about the conventional aspects of the UFO wave. (Thanks to Patrice Seray)
http://www.lulu.com/shop/http://www.lulu.com/shop/collectif/ovni-en-belgique-contributions-sceptiques/paperback/product-22234094.html 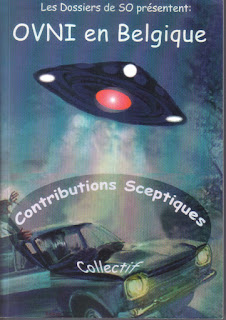 TV Documentary on the T-67 Report
What follows is a visual complement to the paper I recently wrote regarding the last UFO-related file pending declassification in Spain:
https://www.academia.edu/12561888/DESCLASIFICACION_OVNI_EL_ULTIMO_EXPEDIENTE
I am grateful to José Páez, producer of nnTV (Mérida, Spain) for the excellent film made about the spheres and other objects that decayed from space on December 6, 1965 over Spain, resulting from the reentry of fragments of the booster of the Soviet spacecraft Luna 8. They were kind enough to interview me for that program, which was centered on the Battelle Institute secret report named T-67. The Extremadura channel aired this documentary in June 2015 and can be watched in this link:
http://www.canalextremadura.es/alacarta/tv/videos/52-minutos-informe-t67-050615 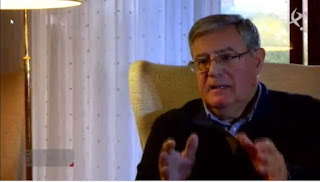 The following link shows the interview I gave last month to the Argentine reporter Débora Goldstern (in Spanish):
http://cronicasubterranea.blogspot.com.es/2015/09/vicente-ballester-olmos-ufologia.html
BOOKS BY THE AUTHOR

Norway in UFO Photographs: The First Catalogue (with O.J. Braenne) 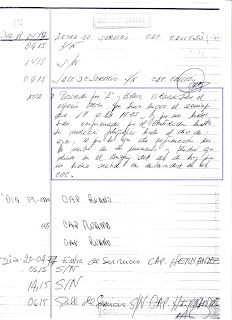 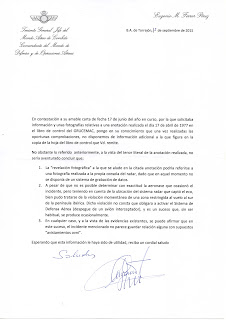 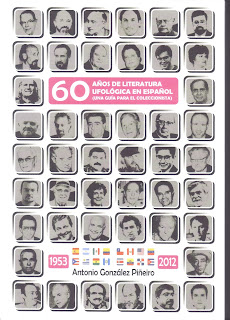 How UFOs Conquered the World 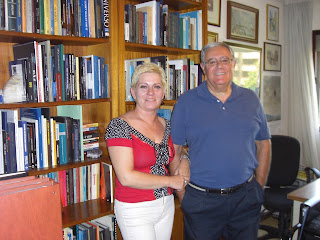